Whoever said “All roads lead to Rome…” must have been a Roman – not a Florentine. A trip to Italia is not complete without a visit to Firenze, the cradle of Renaissance art and architecture. Museums and galleries overflow with the work of one time “locals” – names like Michelangelo, daVinci, Donatello and Botticelli. It is so amazing. I just returned from another visit to Firenze and was even more amazed than on my previous visits.

What is it that made this trip that much more exciting than previous ones?

First of all, I only stayed in Florence. I did not try to tour three cities in one 9-day trip as in the past. There is so much to see in this fascinating city and I will return to continue my love affair with it.

We stayed at the Four Seasons Firenze. Located outside of Florence’s historic center, it is set amidst one of the oldest, largest and most beautiful gardens in the city, Giardino della Gherardesca.

The 11 acres features ancient towering trees scattered with seating areas and superb sculptures – some new, some centuries old. And the buildings situated there are even more handsome. After seven years of renovation, the 15th-century Palazzo della Gherardesca and the 16th century Conventino are now the home of the new Four Seasons Hotel Firenze. Commissioned in 1473 by Bartolomeo Scala, chancellor to Florence’s legendary Medici family, the palazzo was later the residence of Cardinal Alessandro de Medici, who became Pope Leo XI.

An arcaded courtyard is decorated with 16th-century frescos by Flemish mannerist Jan van der Straet (also known as Giovanni Stradano). There are other Stradano frescos in what was once the palazzo chapel and on the staircase that ascends to the grand suites of the piano nobile. The hotel features other museum quality baroque wonders, including original Florentine art and craftsmanship found in the hotel’s bedrooms, suites and bathrooms. All this and the spectacular service made the Palazzo a very special place to call home.

Second, and perhaps even more important, were our tour guides. Adagio con Brio Management provided us with two of the most informed and passionate licensed guides who customized three different private tours for us. Each was so spectacular that they left many of us in tears. 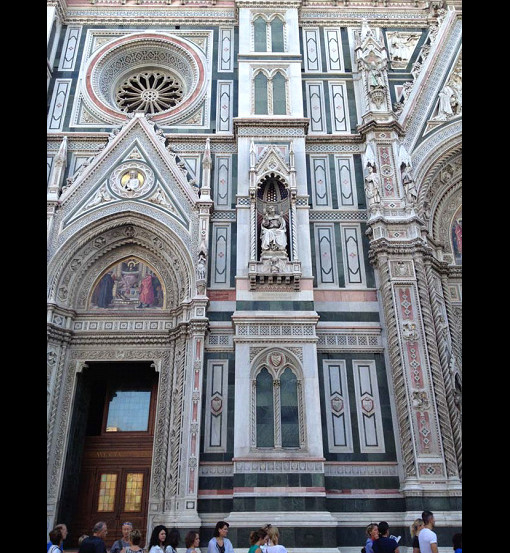 Green, pink and white marble panels comprise the Gothic Revival façade of The Basilica di Santa Maria del Fiore (St. Mary of the Flower), the city’s main church (also called Il Duomo di Firenze). The wealth and prosperity of Florence is obvious in the intentionally elaborate exterior, while the relative bareness of its vast interior corresponds with the austerity of religious life. While the basic structure was completed in 1436, the façade was built in the late 19th century. It remains one of Italy’s largest churches. 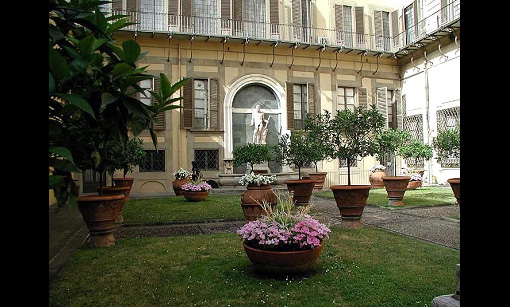 During the 14th to 16th centuries, the financially powerful Medici family ruled the city, bringing it to prominence as they encouraged and attracted the era’s rising contemporary artists. In fact when Lorenzo de Medici, considered the city’s greatest patron, lived in the Palazzo Medici, he invited a young Michelangelo to move in while developing his art expertise. Today sculptures and orange trees fill the palace courtyard garden.

Of course, everyone goes to see the David – both the original at the Academia and the copy outside of the Uffizi Gallery. But did you know Michelangelo made quite the political statement while carving away at the block of marble that became one of the most recognizable works of art of all times? David was the biblical “David” who slew Goliath; the Medici’s commissioned this piece for the top of the Duomo. But in his acceptance of this project – Michelangelo created David to represent the people who were to slay the Medici family. They had abolished democratic rule in Florence and therefore became the giants. When he finished this majestic work of art – he left Florence – the city he loved – and never returned. The people of Florence did not have to slay the Medici’s because the siblings murdered one another and destroyed their dynasty forever. There are no descendants of the Medici family today. 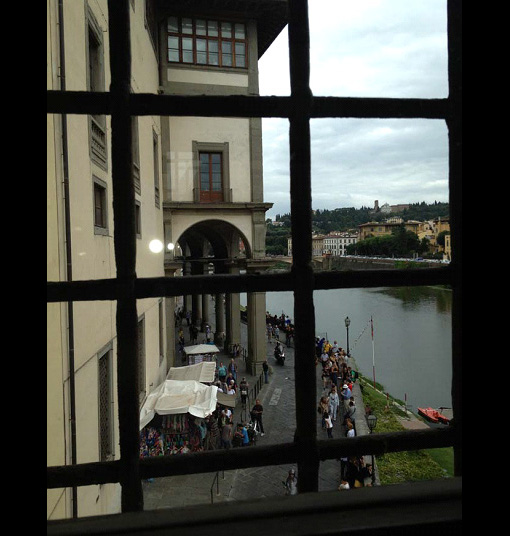 The Vasari Corridor is one of Florence’s best kept secrets or was until Dan Brown featured it in his latest novel Inferno. Rarely open to the public, this aerial walkway was built in five months in 1564 by order of Grand Duke Cosimo de Medici just in time for his son’s wedding. (What parents won’t do for their children’s wedding!) It is an elevated path that allowed the royal family to move freely and unobserved from their residence at Pitti Palazzo to the government palace on the other side of the Arno River. 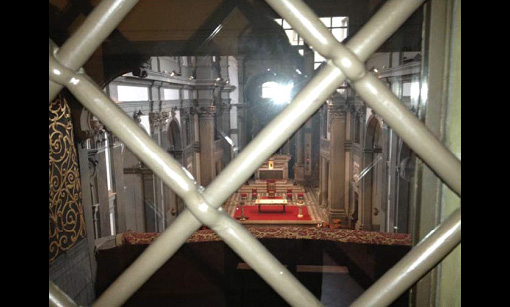 Hidden between houses and other buildings, and passing right through a church, this was my favorite view during a private VIP tour. The passage allowed the Medicis to sneak to Mass without being observed by the public – an enviable position when it is difficult to tell friends from enemies.

By the way, the Corridor is lined with an amazing collection of artistic treasure. What else would one expect of the Medici’s Florence?

All of Florence’s historic center is part of UNESCO’s World Heritage site. If you have not been, I certainly recommend you include it in an upcoming travel itinerary.

May your world be beautiful…